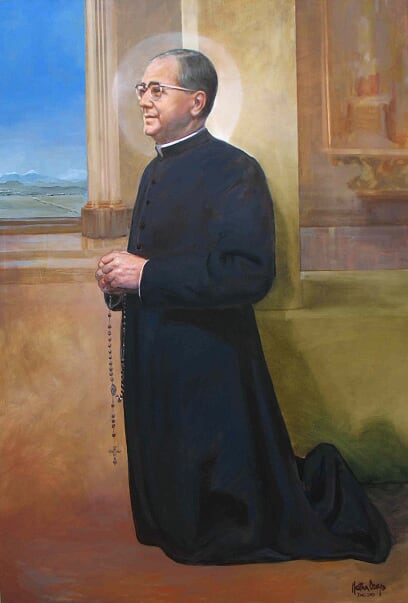 A brief biography of the founder of Opus Dei.

Josemaria Escriva was born in Barbastro, Spain on January 9, 1902. He was ordained on March 28, 1925. He studied civil law along with his ecclesiastical studies, and in 1927, he moved to Madrid to obtain a doctorate in law. While there, he worked hard with the poor and sick, and also with students, workers, and professionals.

On October 2, 1928, he saw by divine inspiration, as the Pope’s Apostolic Constitution Ut Sit affirmed, that God was asking him to spread the universal call to holiness, and that a new path would be opened up within the Church – Opus Dei – to spread this call throughout the world. History has borne out this vision: there are now around 90,000 people in Opus Dei and his spiritual message has reached millions.

His apostolic work was not limited to Opus Dei, however. He helped numerous people discern vocations to the priesthood and religious life, both active and contemplative. In 1943, he founded the Priestly Society of the Holy Cross, an association inseparably united to Opus Dei, to which belong thousands of diocesan priests around the world. And his Christian teachings on marriage have been especially influential, with countless people putting them into practice in their lives.

Escriva was always a proponent of understanding and dialogue, and in 1950 he won the Holy See’s approval to allow Opus Dei to appoint Cooperators, who could be Catholics, non-Catholic Christians or even non-believers.

Inspired by Escriva’s teaching and his promotion of the apostolic and social responsibility of Christians, the members and Cooperators of Opus Dei have started hundreds of evangelical works and social initiatives all over the world, especially among the poor and disadvantaged.

Willing to innovate, but always faithful to the Magisterium of the Church, Escriva was described by Pope John Paul II as a precursor of the Second Vatican Council. He anticipated by thirty years many of the teachings that, after the great ecclesial assembly, became the patrimony of the whole People of God.

He is the author of books of spirituality which are read around the world. His best-known book is The Way, which has sold nearly four million copies in 43 languages.